Wilmingtonians Among Those Honored at this Year’s Festivities

WILMINGTON, N.C. March 20th, 2019- The North Carolina Azalea Festival is excited to announce Queen Azalea and Invited Guests of the 2019 Azalea Festival.  These guests will be attending multiple events throughout the week of April 3-7, 2019.

The North Carolina Azalea Festival’s 2019 Queen Azalea is Briana Venskus, an actress and production assistant with a career in film production. She has spent 10 years building her career in film, while also becoming a strong voice for the LGBTQ community in the film industry. She grew up in Wilmington, NC and attended The University of North Carolina School of the Arts where her interest in drama soared to new heights. Venskus’ interest in acting continued as she moved to Los Angeles, California and received a Bachelor of Fine Arts in acting from the California Institute of the Arts in 2009. While attending the Institute, she made her first screen debut in 2007’s Walk Hard: The Dewey Cox Story. During her time as an actress, Venskus also began her career in film production working behind the scenes as a production assistant on TV shows such as Dexter, True Blood, Bones, Happy Endings, and the widely known 2009 film, The Fast & the Furious. She continued to make appearances on screen with small or uncredited roles before playing her first major role as Precious in 2014’s Let’s Be Cops, which also starred Jake Johnson and Damon Wayans Jr. from the popular TV series New Girl. Since then, she has played many recognizable roles in hit TV shows like Nashville and the Netflix original series Grace and Frankie. If you are familiar with AMC’s The Walking Dead, you will recognize Venskus as Beatrice, who appeared on the show from 2016 to 2018. She is also one of the few actresses to play notable roles in both DC and Marvel Cinematic universes. Marvel fans will recognize her as Agent Piper in Agents of S.H.I.E.L.D., while fans of DC Comics remember her as Agent Vasquez in the CW series Supergirl. Venskus continues to gain popularity in the film industry and make a name for herself in production.

Claire-Emma Britt, a junior from John T. Hoggard High School, was crowned the 2019 North Carolina Azalea Festival Princess during the 71st Annual North Carolina Azalea Festival scholarship pageant on Saturday, March 2nd. She and her court were selected from among 21 contestants representing 6 area high schools. Claire-Emma is a student-athlete, playing both basketball and soccer. She is also a member of the National Beta Club, a tutor for “Readers are Leaders,” as well as an Ambassador for the Substance Misuse Awareness Committee. Outside of school, she enjoys babysitting, traveling to unique places and spending time around our beautiful city. After high school, she would like to attend nursing school at UNC-Chapel Hill, ECU or UNCW to pursue her passion of becoming a travel nurse.

Tamera Young is an 11-year WNBA veteran and CEO of TY1Gear LLC; graduated from E. A. Laney High School in 2004; inducted into the E. A. Laney Hall of Fame in 2012 where her #11 jersey is retired. Graduated from James Madison University in 2008 majoring in Kinesiology, at that time ranking as the Colonial Athletic Association’s and JMU’s Women’s basketball career scoring leader and no. 2 career rebounder; inducted into the JMU Athletic Hall of Fame in 2018. Tamera is the first female from James Madison University to be drafted to the WNBA; First-round draft pick (#8 pick overall) by Atlanta Dream in 2008; Played nine seasons with Chicago Sky. Currently playing with Las Vegas Aces, (2nd season with Vegas).

Grace Boyles is the 2018-2019 National Cherry Festival Queen. She is 21-years-old and was born and raised in Traverse City. She is currently attending the University of Michigan where she is double majoring in Communications Studies and Creative Writing. Upon graduating, she hopes to combine her education and her love of sports to pursue a career in sports broadcasting. She is humbled and blessed to be able to represent her beloved hometown and the cherry industry.

Laura Matrazzo of Chapel Hill earned the title of Miss North Carolina 2018 on June 23 representing the metropolitan area of Charlotte as Miss Metrolina. Collectively, Laura has earned $31,000 in scholarships from participation in the Miss America Organization and graduated from Clemson University with a bachelor of science degree in marketing. Laura passionately advocates for financial literacy in North Carolina with her social impact initiative, “Money Talks: Student-Focused Principles of Financial Management” for which she received the Miss America Community Service Award as well as a Wells Fargo Community Impact Scholarship.

Lt. Colonel Allen T. Lamb USAF (Retired)
Parade Marshal A native of Lumberton, North Carolina, Lt. Col. Lamb is a highly decorated veteran of the Korean and Vietnam wars. As a result of his service to his country, he received two Silver Stars for Gallantry, a Distinguished Flying Cross for Heroism on the Battlefield, nine air medals, and a Purple Heart. During his career, he was forced to eject supersonic, unstrapped from his seat. He was the seventh pilot to eject supersonic (the only one unstrapped), one of three to survive and the only one at that time to return to flight status. Featured in Secrets of the Arsenal on the History Channel and in Hunter Killers by Dan Hampton, Lt. Col. Lamb is recognized for his role in Wild Weasel I by destroying the first three surface-to-air (SAM) sites in Vietnam and setting the stage for modern day air warfare.Lt. Col. Lamb currently resides in Wilmington and is married to Frances Roper Lamb, a Wilmington native.

Bergen’s work reflects a celebration of God’s majesty in all the beauty he has created. Through her art, she brings nature’s small intricacies to the forefront. By layering soft, organic strokes, Bergen seeks to create pieces that invite the viewer to reflect on the simplicities that make life beautiful. Bergen has loved painting for as long as she can remember. Having no formal art training, coming into this vocation has been the result of a lifelong expression. Creating custom work for clients that exemplifies their taste and shares Bergen’s heart has been more rewarding than she ever could have imagined. She is thankful to have work displayed in homes and collections across the United States as well as internationally. Bergen paints from her home studio in Hampstead, North Carolina, which she shares with her husband, Andrew, who serves in the Navy and their two-year-old son who adds happy little strokes to all of Bergen’s paintings. She loves having his tiny hands in all of her work; it reminds her to not take herself too seriously, stop and enjoy life’s beautiful moments, and remember that nothing great is achieved alone.

Mrs. Steffanie B. Easter assumed responsibilities as the Director, Navy Staff in June 2018. In her role as Director, she serves as the senior Chief of Naval Operations (OPNAV) civilian and coordinates enterprise level efforts across the entire OPNAV staff. Principally, Ms. Easter ensures alignment of more than 400 Flag Officers and Senior Executives, providing indispensable advice and support to the Chief of Naval Operations and the Secretary of the Navy. Mrs. Easter was appointed to the Senior Executive Service in December 2002 and has over 30 years of Federal Service.

Manley Pope is an award-winning performer, director, writer, producer, and lecturer who began his career traveling the world as a model for fashion’s top designers. He is best known for his breakout role as Devon Whitelaw on the hit FOX television series Sweet Valley High and on Broadway, starring as Roger Davis in the Tony and Pulitzer Prize Award-winning musical RENT. He is currently Guest Starring on CBS’s Blue Bloods, as the slick and charming bouncer King and CSI Miami fans will recognize him as Rick “V-Ray” Graves, leader of the notorious Crypt Kings biker gang. Manley is a native of Wilmington. The North Carolina Azalea Festival Thanks Its Sponsors! 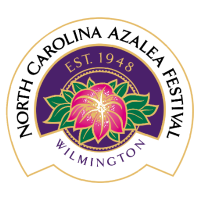 Our mailing address is:
North Carolina Azalea Festival
5725 Oleander Drive
Ste. B-7
Wilmington, NC 28403
Add us to your address book

Want to change how you receive these emails?
You can update your preferences or unsubscribe from this list